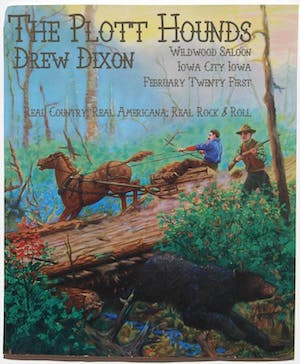 iCal
Google
The Plott Hounds with Drew Dixon at Wildwood

Coming together on the Mississippi River in 2014 The Plott Hounds have created a dedicated grassroots following with their blend of Southern Rock & Roll, hints of Funky Blues and paying homage to the Outlaw Country legends of old. The Plott Hounds played their first performance at The Terminal Bar in Northeast Minneapolis, MN on July 14th 2014 and have not looked back since. The Plott Hounds take pride in expressing their passion and dedication for songwriting and it’s call to playing original music found deep in the soul.

Burning the midnight oil playing shows that stretch across the United States, along with a repeat tours in the United Kingdom, The Plott Hounds addictive energy has paved their way to join the stage with names that started off as heroes and inspirations like Cody Canada, Band of Heathens, Charlie Daniels, Jason Boland and more.

Since inception, the band has released – “Thirsty For Something” EP (2016) and “Lost Summer Day” EP (2017) along with a double live album "Blue Collar Hippie Music" (2016). “Lost Summer Day” was recognized as one of the top 40 Americana albums released in 2017 from The Americana Music Show. Saving Country Music recently tabbed The Plott Hounds as one of the new bands rising with the torch in the world of Southern Rock n Roll and in 2018 the band was recognized as award winners by the Midwest Country Music Association in the categories of “Album of the Year” and “Band of the Year”. The Plott Hounds are now touring in support of their newest release (March 2019) – “Damn The Wind”.

The current line up helped solidify the songs and sounds that the band now calls home. Each coming from a history in music, some going back twenty years playing together, to create the nostalgic sounds on stage. The Plott Hounds Feature: Noah Alexander (Atlanta, GA) Lead Vocals & Guitar, Jeff Powell (Charles City, IA) Lead Guitar, Catfish Kirk - (Champlin, MN) Lead Guitar & Vocals, Kevin Coughenour - (Plymouth, MN) Bass Guitar & Vocals and Tater on Drums (Vadnais Heights, MN). As one, the band is more than just strings and drums but a family; whether it's jam sessions on the river bank or three am breakfast detours.

Born and raised in the south, Dixon's musical upbringing centered mainly around rock, soul, gospel, and R&B. His father's record collection and his mother's hymnal formed the basis of his musical knowledge, until he left home for The University of Georgia, where he continued to learn and surround himself with talents far superior to his.

For the last 6 years, Dixon has called Nashville, TN, home, while continuing to tour extensively. 2015 saw the release of both his debut and follow up singles, "Dead Man," and "All of My Pain." Both singles, accompanies by music videos, received a strong welcome from the industry and fans alike.

2016 was a busy year for Dixon, who shared sold out venues with acts like Chase Rice, Kaleo, LANco, and Ryan Hurd. Riding the momentum of his 2015 releases, Dixon has been writing with some of Nashville's top up-and-coming artists, as well as playing shows nationwide, including his first international shows in Mexico. 2017 hasn't slowed down, with a new single--Madam D's--released in April topping out in the Top 15 on iTunes, and follow ups South Carolina (Sept) and Whiskey and Wine (Nov) rounding out the year.