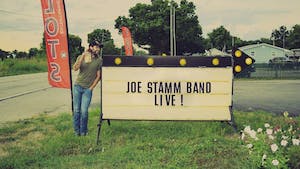 The Joe Stamm Band (JSB) is a high energy country rock group rooted in the Black Dirt of the American Midwest. Born and raised in the fields and fence rows of central Illinois, Joe and the band play a soul pumping brand of country rock uniquely their own. In 2018, DirtRoadAnthems.com told their readers, “If you are looking for a great new country/rock/Americana band to listen to, [Joe Stamm Band] is the perfect one.” JSB songs are laced with rural American imagery, hard-driving guitar, and songwriting that invites listeners into a deeply personal, authentic life experience.

Joe’s early life revolved primarily around football, earning a scholarship to play quarterback at Northern Illinois University. Injuries, however, cut a once promising career short and sent him searching - searching for a new identity, new hobbies, new pursuits and points of focus. He poured himself into academics, hunting, his childhood faith, partying & burning candles at both ends. Gradually, music and songwriting dominated Joe’s focus and stories began to emerge – not just his but yours, ours. Over time, a community of musicians & fans took notice. A band formed & audiences started filling venues.

Joe has now opened for acts such as Travis Tritt, Chris Knight, Jamey Johnson, the Kentucky Headhunters, Jerrod Niemann, Parmalee, and JT Hodges, among others, even sharing the bill with personal heroes Willie Nelson and Kris Kristofferson at the Tailgates and Tallboys Music Festival. Joe Stamm Band is anchored by long time members Joe Stamm, at guitar & lead vocals, and Jon Byler Dann playing bass guitar and singing backup. Bruce Moser on drums and Dave Glover on guitar fill out the five-piece group. Their focus is singular – play great music for as many people as possible. Joe acknowledges, “We started this thing in the grassroots of central Illinois. And we plan to stay firmly rooted. Roots and growth are dependent on one another. We trust our fans will keep us centered on both.”

JSB releases new music every couple of months. Most recently, Joe released a duet with Nashville based Tasji Bachman, entitled “First Saw You.” The band’s previous two releases, both in March of 2018, are “Fetch Me,” a hymnal tribute to Joe’s family heritage, and “Midwest Girl,” an country rock anthem to women of the American Midwest. JSB music is available on all digital music platforms (i.e. iTunes, Spotify, etc.).

Joe Stamm Band is proudly the official house band of 104.9 the Wolf and sponsored by Last Chance Bar & Grill.